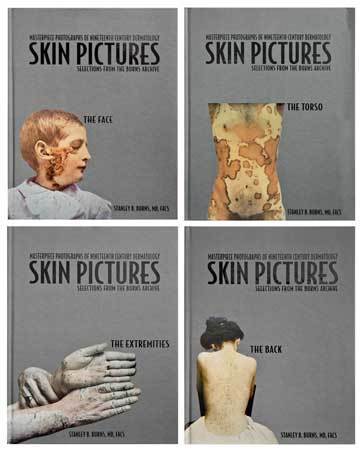 Skin Pictures: Masterpiece Photographs of Nineteenth Century Dermatology Photography was a key that enabled dermatologists to unlock the secrets of skin disease. This is the first photographic historical work to document the history of dermatology during its evolution into the modern specialty. This compilation of photographs showcases the patients whom nineteenth century dermatologists encountered while categorizing and naming skin diseases. Photography has served dermatology perhaps more than any other clinical specialty.

Volume 1 -The Face The face is our most distinct feature. These nineteenth century photographs visually represent the challenges encountered by early dermatologists, and the range of disease and degree of facial deformity patients lived with. The medical trials and tribulations suffered are hard to comprehend today. By the end of the century, Finsen’s light therapy and radiological therapy cleansed the ravages of tuberculosis and other skin diseases from tens of thousands of faces. The role of Louis Duhring, MD, Philadelphia’s leading dermatologist, in early medical photography, is examined within the history of the specialty. In 1870, Duhring, together with Francis Maury, MD, created America’s first medical photographic journal, Photographic Review of Medicine and Surgery. In this volume, many of the most iconic facial dermatologic photographs, including noted cases of syphilis, neurofibromatosis and lupus vulgaris, are presented in their original hand-colored tones, together with some of the most artistically documented examples of skin disease in the nineteenth century.

Volume 2 – The Torso Faces generally are not hidden from view, while the bulk of the body, with the exception of the hands, can be well disguised. Severe cases of syphilis and other maladies could be generally concealed. Shame, modesty and fear of treatment encouraged patients to ignore their disease until it progressed to the extreme. Shown in this series are both common and uncommon skin diseases. Taking their cues from the art world, photographers posed and lit their subjects as artistically as possible, since in most cases patients were photographed in the nude. Acknowledged in this volume is the monumental contribution by New York dermatologist George Henry Fox, MD, in the promotion of dermatological photography. He was the most prolific dermatological photographic publisher, and images from his various books from 1879 through 1900 are presented. Photographs from a recently discovered, unappreciated work by Fox, Skin Diseases of Children, will appear throughout the series. These photographs have not been reproduced since their original presentation and some of the images are truly iconic, visually summing up the entire era.

Volume 3 – The Extremities Dermatological disease of the extremities offers a contrast in exposure. The wearing of gloves, a common accessory of nineteenth century costume, as well as long gowns and trousers, offered some semblance of normalcy by covering the affected part. Even massive elephantiasis of the legs could be easily disguised, as could orthopedic deformities, tuberculosis and nutritional diseases, which often deformed the lower limbs. Both syphilis and especially ‘surgical’ tuberculosis were extremely frequent and also deformed joints and limbs. Hiding defects until they reached an advanced stage was common before treatment was sought. Photographing extremities became almost an art form for many photographers as the limb could be positioned in numerous and unique ways. In this volume, the accomplishments of New York’s Henry Granger Piffard, MD, will be reviewed. He was both a pioneer dermatologist and noted practicing photographer. In 1875, he started the first post-graduate course in dermatology in the United States and the following year wrote the first modern textbook on dermatology. In 1882, he began publishing a journal, which evolved into the Archives of Dermatology. As a photographer, he initiated the use of indoor flash photography as well as its application to medical subjects. In 1891, he wrote an atlas using his remarkable ‘flash’ lit dermatological subjects. Many of his remarkable images will be reproduced in this series.

Volume 4 – The Back The back is the least visually accessible area of the human body to oneself and as a result lesions were often ignored until they created intolerable symptoms. The smooth plain surface of the back offers nature a drawing board to demonstrate visual dermatological pathology unencumbered by other details. Some of the photographs appear like topographical maps pointing the way to difficult diagnosis. In this volume, many of the most visually interesting dermatological neoplasms and syphilitic cases are presented, along with common diseases that dermatologists still encounter today. The groundbreaking efforts of Parisian dermatologist and photographer Alfred Hardy are presented. He was Chief at the Hôpital Saint-Louis, the world’s leading skin institution. In 1868, together with photographer and ophthalmologist A. de Montméja, he published the world’s first true photographic dermatological atlas. These photographs were magnificently over painted to highlight disease processes. While they often seemingly exaggerated the condition, they have been recognized by art connoisseurs as among the greatest examples of early medical photography and have been exhibited in major art museums. This series is the first publication to present the dermatological photographs from all of his landmark works. They serve not only as examples of disease states but mark the effort of pioneer dermatologists to teach and disseminate knowledge.