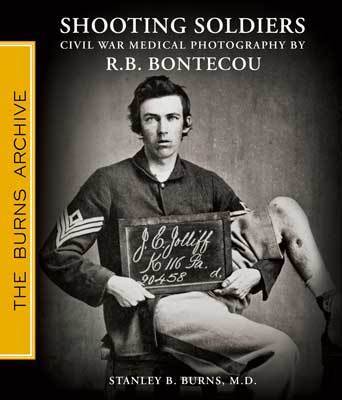 The photographs in Shooting Soldiers: Civil War Medical Photographs were taken by photographer and surgeon Reed B. Bontecou at Harewood US Army Hospital, Washington DC. These selected images, from Dr. Burns' collection of over 1100 Bontecou photographs taken as documentation of injuries suffered during the conflict, are the seminal source of images of wounded warriors of the American Civil War. The faces of these wounded men stare back at us through time.

Dr. Bontecou’s photographs have appeared in numerous documentaries, books, and films, including Masterpiece Theatre, Death & The American Civil War, and Ken Burns’ Civil War. They were also used to create accurate wound in the PBS Series Mercy Street. Since 1983, the images recognized as major works of art, have been exhibited in museums around the world, including Paris, Stockholm, Tokyo and Berlin. They’ve been shown in the United States in over a dozen museums including twice at The Metropolitan Museum of Art and featured in the exhibition Photography and the American Civil War.

The resilience and power of human body and spirit are on display in this visual record of the casualties of war and of the physician’s ability to help and heal.

Save this product for later
Display prices in: USD