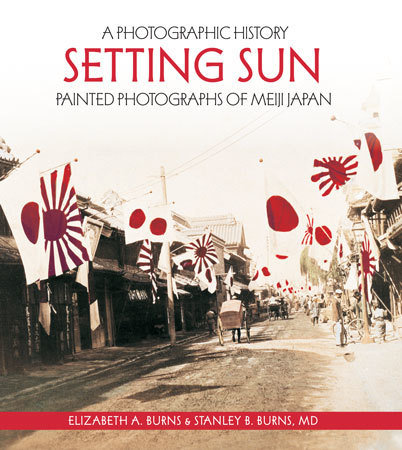 Japan, an island nation isolated until the mid-nineteenth century, opened its doors to foreign photographers in the 1860s. These photographers presented a visual cultural kaleidoscope of Japanese life to an eager outside world.

The 160 photographs in this volume are curated from tourist albums and presented in the typical sequence. The modern reader will experience Meiji Japan in the way of a nineteenth century armchair traveler. While photographers in other countries were marketing sepia-toned prints, photographers in Japan took advantage of local artists and had their prints exquisitely painted. As with all hand-rendered artworks, quality varied; many photographs were executed so well as to challenge modern color photography.
Photographers were limited by government restrictions and many scenes were set in studios rather than in real life. Despite the limitations, tourists visiting the country could purchase albums filled with colorful renditions of Japan’s peoples and places. The carefully staged and approved photographs promoted an idealized and romanticized vision of Meiji Japan.
Modernization and industrialization changed the country dramatically and the last vestiges of the disappearing feudal culture are captured by the camera. These intriguing photographs are beautiful multi-media artworks representing a vanished world.

Save this product for later
Display prices in: USD