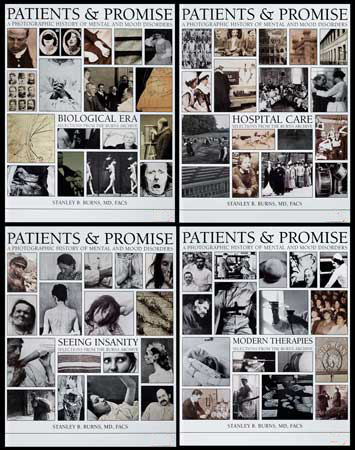 Patients & Promise: A Photographic History of Mental And Mood Disorders

The series is divided into four volumes, each covering one important topic in mental health care: Biological Era, Hospital Care, Seeing Insanity and ‘Modern’ Therapies. The books are presented this way because it is more significant to show related images in photographic history together. The time period covered is from 1845 to 1945. Every book begins in the early years, but each ends at a different place in the twentieth century.

In Volume One, the Biological Era, emphasis is placed on images that clearly document the establishment and development of photographic, anatomic, eugenic, criminal and disease related concepts. Physicians and scientists involved are illustrated in portraits or at work, among them Duchenne de Boulogne, César Lombroso, John Shaw Billings, Paul Flechsig and S. Weir Mitchell. Phrenology, neuroanatomy, craniology, criminal anthropology and other first biological psychiatric era sciences are presented in photographs that clearly demonstrate the practices. It is in this volume that the earliest journals with psychiatric photographs are showcased. The pioneer efforts of early scientific photographers, such as Eadweard Muybridge, are detailed. The treatment and philosophies regarding the mentally challenged, or as these patients were labeled, mental defectives, feebleminded or retarded, are reviewed in a story about Letchworth Village. The embarrassing dictums and philosophies of the first biological psychiatry era helped lead to some Nazi philosophies and practices, but the history is an important part of the profession and the lessons learned from the past may help make the future secure for all. Today, psychiatry is in its second biological era, in which scientists emphasize genetic alteration and therapy, neurochemistry, neurophysiology and neuropharmacology.

In Volume Two, Hospital Care, the role of mental hospitals is presented via photographs that document institutions, as well as the various therapies they provided. The implements of restraint are presented and a rare image of chained patients enlivens the history. Some images accurately show the transition to social situations and group participation therapies in the early twentieth century, such as exercise classes, social events, occupational and music therapies. Early innovators and their work in care of the mentally ill, including Thomas Story Kirkbride, S. Weir Mitchell, and August Liebault, are presented. Photographs of psychiatric wards in 1860 and 1930 document and offer contrasting images of asylum care. The important role of psychiatric nurses and attendants is shown in images relating to their emergence as competent, respected professionals.

In Volume 3, Seeing Insanity, a general history of the photography of psychiatric patients is presented, as a preamble to showing the photographs of Uruguayan psychotic women from the albums Manicomio Nacional: Departamento de Mujeres. The works of pioneer psychiatric photographer Mathew Brady, and neuropsychiatrists Hugh Welch Diamond, Dietrich Georg Keiser, James Crichton-Browne, and Duchenne de Boulogne, are introduced. Some of the earliest psychiatric publications with patient photographs are shown with images from The Mind Unveiled, as well as the publications of neuropsychiatrists Theodor Ziehen, Emil Kraepelin, Thomas Stretch Dowse, and others. The photographs of Uruguayan women, the main focus of this volume, offer the modern reader insight into the physiognomy of psychotic patients, and provide visual evidence as to why the photograph was such an article of faith and evidence for nineteenth century practitioners. Admission and discharge photographs further our appreciation of the efforts of our predecessors to help and heal their patients, and provide graphic evidence of the accomplishments of these practitioners.

In Volume Four, ‘Modern’ Therapies, a visual survey of the range of treatments that mentally ill patients received is presented. The photographs in this volume, when combined with the phrenological and hypnotic studies in Volume 1 and the images of hospital treatments and patient programs in Volume 2, create the largest, most comprehensive collection of therapeutic images ever published in any psychiatric photographic history text. Starting with the oldest of treatments, hydrotherapy, and ending with one of the most modern, electroconvulsive therapy, the images vividly illustrate many of the significant therapies of the profession in the 1845-1945 era. Those that are not shown are discussed in the accompanying text. Images of physicians treating mental patients with electrotherapy at the turn of the century display not only the devices, which were once an essential tool of mental health care professionals, but several methods of delivering the electric charge. All noted nineteenth century practicing psychiatric professionals used the therapy at some time in their careers, even psychoanalyst Sigmund Freud. Images of vibratory therapy, radio wave, heat diathermia treatments and other such outmoded therapies are included to illustrate some crucial treatments in the profession that have fallen into disfavor, and yet at one time were significant if not ‘leading’ treatment modalities. An area left out of most texts but included here are images of neurosurgical operative procedure results for neuropsychiatric disease and injury. The images are rare but pertinent in the history of the profession. At the turn of the century, the establishment of safe, effective neurosurgical operative techniques would ultimately lead to one of modern psychiatry’s most controversial chapters, psychosurgery and

the lobotomy. The first effective therapies that prevented the development of psychotic disease (neurosyphilis) and/or resulted in cures of psychosis are illustrated in images of neosalvarsan and fever therapy treatments. The expulsion of Jewish Germanic psychiatrists and psychologists by the Nazis in the 1930s is a topic discussed in most texts, and created a great upheaval in the profession. The centers of psychiatric study and philosophical ideology were moved from Berlin and Vienna to London and New York. For the first time, a photograph is reproduced of the exhibition mounted by Nazis in Vienna deriding Jews in the medical profession, and especially neuropsychiatrists. Some images of experimental psychology are presented, including a fascinating picture of psychologist Arthur MacDonald, who measured the heads of United States Congressmen in an attempt to see how much ‘brains’ they had. Three remarkable photographs by Arthur Rothstein at the Lexington Narcotic Farm document government addiction treatment, and an image of electroconvulsive therapy concludes the series as the procedure visually brings care of psychotics into the modern era.