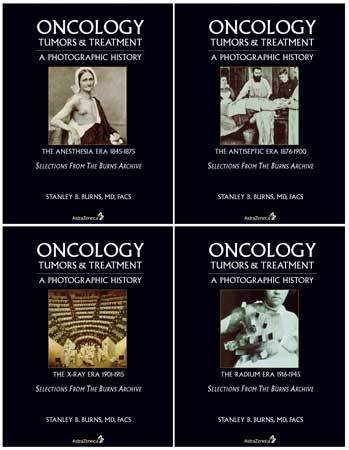 Oncology: Tumors & Treatment A Photographic History covers the branch of medicine that deals with the study and treatment of tumors. Photography was presented to the world in 1839. This miraculous invention was immediately adopted by the medical community to record unusual cases and to capture images of both pioneer physicians and the everyday practitioner. The compilation of photographs within these volumes reflects medicine’s fascination with oncological disease. It is not only a history of major achievements, but the struggle of physicians and their patients.

In Volume One: The Anesthesia Era 1845-1875, many of the earliest existing dramatic oncological photographs will be presented along with photographs that document the practice of surgery and patient care of the time. Also presented are oncology photographs from all the world’s pioneer medical photographic journals. Many of these images have not been published since their initial printing. These images are among the most dramatic medical photographs; they document the extent of disease and the challenges faced by physicians. The trials and tribulations endured by these patients are hard to comprehend by today’s standards. In this early period, because of mortality from infection, surgery was indicated only when cancers were visible and disabling. Head, neck and limb tumors were the surgeon’s principal domain.

Volume Two: The Antiseptic Era 1876-1900 documents the rise of surgery. Dr. Joseph Lister’s antiseptic principles were announced in 1867. Unfortunately, unlike anesthesia (1846), which was heralded and used worldwide almost immediately, antiseptic and aseptic surgical principles were not generally adapted until the late 1880s, after Dr. Robert Koch’s establishment of bacteriologic infectious principles (1882). After their implementation, chest, brain, throat, and abdominal surgery became safe and reliable. Operations on cancers in these organs became feasible. New standards of surgical intervention would soon result in the establishment of surgical subspecialties. This period ends with the development of antiserum for infectious disease and the discovery of radioactivity and x-rays.

Volume Three: The X-Ray Era 1901-1915 documents the most exciting epoch in surgical history. The advances of x-ray therapy and radium treatment, the establishment of safe, effective surgical procedures, and the creation of specialties such as urology, endocrinology and neurosurgery made the entire body safely accessible. The success of vaccines for numerous diseases, the discovery of nutritional diseases and animal vectors of disease, allowed the conquest of deadly age-old scourges. This was also the era of the greatest consumer inventions of all time. These inventions would change the world and provide the middle class with almost unimagined luxuries. Automobiles, airplanes, radios, electric home appliances, telephones and movies made this an age of wonders. Medicine was also looked at as a source of wonders and the surgeon in his operating room was recognized as the master miracle maker. The photographs of this era dramatically portray these accomplishments. In this volume, many noted examples will document leading surgeons at work, as well as treatment modalities.

Volume Four: The Radium Era 1916-1945 documents the rise of significant non-surgical therapies for cancer, dominated by radium and x-ray therapies. Frustrations with so many different forms of cancers lead to other, ultimately less effective treatments: ice, light and heat treatments and various chemotherapeutic and serologic substances. By the end of this era, disenchantment with radical mastectomy and other ‘radical’ procedures became prevalent. The photographs in this volume document the final stage before the great awakening and success of antibiotics, cellular and chemotherapeutic cancer agents.